6th Best Cat in Championship in the Midwest region

Best Tonkinese in the Midwest Region 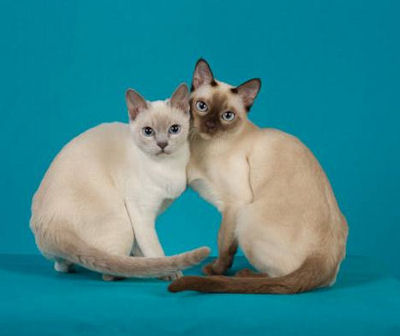 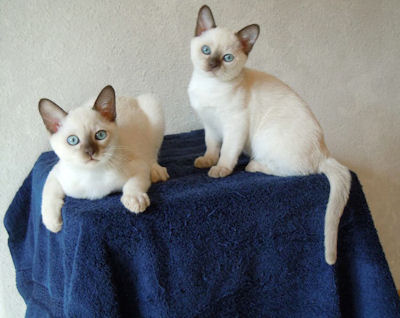 The Tonkinese is a combination of Siamese and Burmese bloodlines. It is believed that natural crosses between Burmese and Siamese have existed for hundreds of years, since these two ancient breeds came from the same general area. Both breeds were depicted in the ancient text The Cat-Book Poems, a manuscript written in the city of Ayudha, Siam (now Thailand) some time between 1350, when the city was founded, and 1767, when the city was burned down by Burmese invaders.

Some of the "chocolate Siamese" shown in the late 1800s in British cat shows were likely what we'd call Tonkinese today. The first North American Burmese, Wong Mau, who became the foundation cat for the Burmese breed in America in the 1940s, was later determined to be a Siamese-Burmese hybrid.

The Tonkinese is a hybrid breed deliberately created by humans to combine the best qualities of both his parent breeds, the Burmese and the Siamese. The planned development of the Tonkinese as a new breed did not begin until the mid-1960s. Breeder Jane Barletta of New Jersey crossed a sable Burmese with a seal point Siamese in order to produce a cat with a moderate body and moderate head type. Around the same time, Canadian breeder Margaret Conroy bred her sable Burmese female to a seal point Siamese male because she couldn't find an acceptable Burmese mate for her timid cat. The offspring of these crosses were lovely tan cats with moderate body and head types, aqua eyes and appealing personalities. Barletta and Conroy discovered each other having similar special new cats and worked together to develop the breed. Thanks to the work of the early breeders the reputation of the breed's beauty and charming personality spread. Efforts to achieve recognition began in both Canada and the United States. Tonks were first accepted provisionally by the Canadian Cat Association under the name Tonkanese. In 1971, the spelling was changed to Tonkinese with full acceptance by CCA.

Not everyone was as enthused as the Tonk fanciers. The majority of Siamese and Burmese breeders wanted nothing to do with these hybrids and many actively worked to keep them out of the show ring. They feared muddying of the integrity of their own breeds. Siamese and Burmese were both being selectively bred to achieve the refined forms we see today: sleek and svelte for the Siamese and compact and cobby for the Burmese. The Tonkinese, whose head type resembles the both early traditional Siamese and traditional Burmese and whose body type falls midway between compact and svelte, wasn't either breed's ideal. Achieving a uniform head and body type was also challenging for Tonkinese breeders, since the two parent breeds were dissimilar. As time passed the two progenitor breeds became even more dissimilar from one another and a distinct and unique Tonkinese type was established. This greatly reduced tensions between the Siamese, Burmese and Tonkinese breeders and exhibitors.

However, Tonk fanciers were determined that their sleek, personable felines would have their place in the cat fancy. After many years, they achieved the look they wanted and the recognition the Tonk deserved. Finally, the premier cat organization, Cat Fanciers of America, granted championship status in 1984. Today, all cat associations accept the breed.

Tonkinese cats are particularly popular among cat lovers who do not favor the extremely svelte look of the attenuated Siamese or the compact, cobby contemporary Burmese that win in the show ring today. The Tonk's head and body type are similar to traditional Burmese and Siamese, particularly since the cats used to create the breed were less extreme in type than today's show Siamese and Burmese

These lovable bundles of feline joy combine the traits of the intensely affectionate, smart and talkative Siamese with the super-devoted, playful and lap seeking personality of the Burmese. That makes the Tonk very affectionate, very playful, and very, very smart. These super cats are known for their athletic abilities, able to leap tall cat trees in a single bound. They are so smart that they will remember at a much later date that favorite toys or treat in sealed containers behind closed cupboard doors.

While they are less talkative than the Siamese and have softer, less intrusive voices, they feel the need to share all the kitty news whenever their beloved humans return home.

Everything is a toy to a Tonk, from the cheapest wad of paper to the most expensive remote-control mouse, as long as you're willing to take part in the fun. Like the Siamese, many Tonks naturally know how to fetch and return toys to their humans for repeated throwing. After enjoying a good play session, Tonks enjoy a nap on a handy lap.

Fanciers say kittens pick their new families rather than the other way around. When you visit a breeder to pick out a Tonk, take home the one who crawls into your purse, climbs purring into your lap or entices you to play. Tonks crave human attention - lots of it - and have a ready purr for any human who provides it. Be prepared to be wrapped around your Tonk's velvety paw. This breed bonds strongly with their chosen humans. They love their humans and demand to be an active part of the family rather than "just a pet."

Tonks are not for everyone, of course. Sharing your life with a Tonk is not a decision to make lightly. Very social, Tonks don't do well if left alone for long periods. If you really must go out to earn the cat food, be sure your Tonk has another Tonkinese friend with whom to interact while you're away. They tend to get along well with other cats and dogs, as long as the proper introductions are made. But Tonks prefer their humans. Very people-oriented, Tonks pine if their people leave them alone too much or for too long, or don't give them enough love and attention.

Because Tonks are popular, many breeders maintain waiting lists. But fanciers say the terrific personality, body style and attractive color combinations are worth the wait.

Neither streamlined like the Siamese nor stocky like the Burmese, the Tonkinese strikes a happy medium. The conformation is midway between the extremes of the long, svelte body type and the cobby, compact body type. The Tonk has a medium-length torso that shows well-developed muscular strength without coarseness. The abdomen is taut, well-muscled and firm. The legs are fairly slim and are in proportion to the body in length and boning, with the hind legs slightly longer than the front legs. The paws are more oval than round. The tail tapers and is in proportion to the length of the body. Tonks are very muscular which leads them to be surprisingly heavy for their size: Adult males weigh 8 to 12 pounds and adult females weigh 6 to 10 pounds. Overall balance and proportion are more important than size.

The head is a slightly rounded modified wedge, somewhat longer than wide, with high cheekbones. A slight, gently curved whisker break follows the lines of the wedge. The blunt, slightly rounded muzzle is as long as it is wide. There is a slight nose stop at eye level. A straight line can be drawn from the tip of the nose to the tip of the chin. A gentle contour, with a slight rise from the stop to the forehead, can be seen.

The ears are alert, medium in size, and are broad at the base and have oval tips. They are set as much on the sides of the head as on the top. The hair on the ears is very short and close-lying, and the skin may show through.

The open, almond-shaped eyes are in proportion to the face and are slanted along the cheekbones toward the outer edge of the ear. Eye color depends upon coat color; aqua eye color is a definitive characteristic of the mink pattern. Depth, clarity and brilliance of eye color is preferred, and is best seen in natural light.

The coat is medium-short and is close-lying, fine, soft and silky with a lustrous sheen. Because the Tonkinese inherited the color and pattern genes from both his parent breeds, the Tonk's coat comes in three patterns: Mink, Point and solid (which is called sepia by some associations). Contrast is the difference between the three patterns: Point Tonks have a point color with high contrast to body color and have blue eyes; Mink Tonks have a point color with medium contrast to body color and have aqua eyes. Solid Tonks are not like the solids of other breeds; the body colors are slightly lighter shades of the point colors, with a slight contrast between the body and the point colors. Solids have chartreuse to lime green eyes.

Natural, Blue, Champagne and Platinum are the four universally accepted Tonk colors. The colors and patterns can be confusing, because they exist in the Siamese and Burmese breeds as well, but are called by other names. For example:

In CFA, all three patterns in all four colors of Tonkinese can be shown for championship. This is also true of ACFA, CFF, CCA, and TICA. Honey and fawn colors and tabby patterning have been accepted in some foreign cat associations. 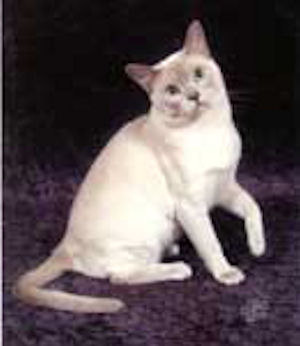 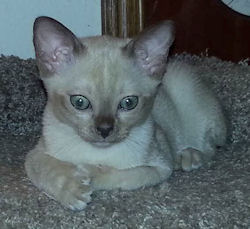 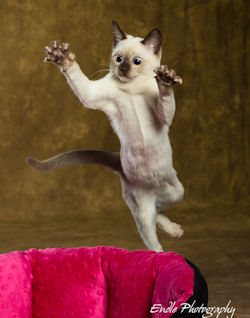 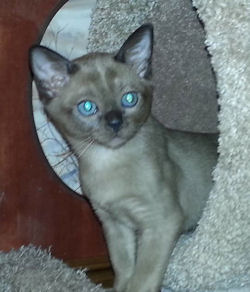 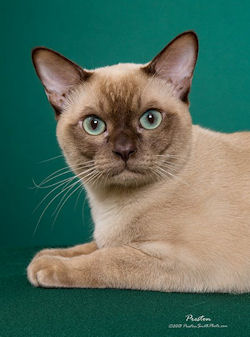